Many factors can influence how we consider properly designing the topology and hardware required for our customers' environments.  Data volumes, incremental refreshes, end-user concurrency, high-availability, the need for Spark, and other factors dictate how we design our Incorta environments.  Due to these complexities, Incorta sizing ends up being as much of an "art" as it is a "science".  The purpose of this document is to educate how we think about proper Incorta hardware sizing, what factors influence our design decisions, and to provide some "rules of thumb" that can be applied in practice for our customers.

The Incorta Professional Services team is always available to guide our partners and customers with their Incorta hardware sizing initiatives.  The Incorta Professional Services team has developed a HW sizing questionnaire that collects the necessary inputs about the customer's environment and application which inform a proper sizing.  Please contact your Incorta team to gain access to this sizing questionnaire.

These concepts apply to all versions 4.5+ and version 5.0 of Incorta.  This article only applies for implementations on-premises or in your private cloud.

Architecture – What's Under the Hood?

The three primary components of the Incorta platform are the Loader Service, the Analytics Service and the Incorta Storage Layer.  The loader service, as the name would imply, is responsible for invoking the Incorta connectors to pull data into the Incorta platform.  The loader service either pulls data in full or incrementally via the Incorta connectors.  The loader service requires enough memory (aka RAM) to house about 1.5x the size of the compressed data in the storage layer.  It requires this memory in order to keep all of the data on the ready so that incremental loads can be merged and subsequently written to the Incorta storage layer.  The columnar storage layer uses a parquet file format to store the data on shared disk.  Once the updates have been written to the storage layer, the analytics service is alerted to which columns have changed and it pulls in the changes accordingly with no downtime to the end users.  The analytics service is responsible for housing the in-memory direct data mapping (DDM) service for the platform.  This service answers all incoming queries of the data, whether through the Incorta UI or the Incorta SQL interface – both of which are also contained within the analytics service.  The CMC, or Cluster Management Console, is the administration, monitoring and provisioning service for the platform.  It can create, start, stop, and monitor the different loader or analytics service(s) in the environment.  The CMC becomes particularly useful when multiple servers or services exist within the Incorta environment.  Spark, which is optional, can be leveraged to address advanced use cases like materialized view creation and/or SQL queries back to the parquet files on disk.  The reference architecture and table below provides a more detailed description of each component.

As an in-memory analytics platform, the volume of data we anticipate bringing into the platform is one of the most important considerations for properly sizing the infrastructure of an Incorta environment.  When we consider data volumes, we want to hone in on the expected volume of data in-memory in Incorta.  Because the data in the Incorta platform is compressed, we can’t rely on the data volumes as reported from the source systems solely.  Here are some rules for estimating the expected data volumes in Incorta:

How we plan to refresh our data in Incorta can have a significant impact on how we choose to provision the Incorta services in our environment.  In previous versions of Incorta (e.g. version 3.x and prior), the Incorta dashboards would become unresponsive during data reloads causing a frustrating experience to end users when incremental refreshes were being applied.  In 4.x and beyond, the Incorta loader service has been decoupled from the analytics service alleviating this issues.  However, our refresh cadence and strategy still impacts our design decisions for our Incorta environment.  Provisioning the Incorta loader service on separate hardware from the analytics service is a good idea for Incorta applications that execute frequent or voluminous updates.  This separation avoids resource constraints on the analytics service imposed by the loader service during updates.  This separation, however, may not be necessary for Incorta applications that deliver infrequent data refreshes or when overall data volumes are small.  Lastly, it is worth noting that the Incorta loader service can execute resource intensive tasks during data refreshes, like rebuilding large joins between tables or recalculating formula columns, even if the incremental refresh data volumes are small.

Spark is a very powerful component of the Incorta platform that unlocks a wide variety of advanced use cases for our customers.  That said, it is not required for every use case.  It is important to understand enough of how your Incorta application is going to be designed and implemented up front to know if Spark is going to be required.  Derived tables (aka materialized views) that are defined by python scripting (aka PySpark) as well as aspects of Incorta’s SQL interface for downstream 3rd party visual tools like Tableau and PowerBI all require Spark to be running and available.  Understanding if Spark is going to be used is an important part of designing the topology of your Incorta environment.  If Spark is going to be used is one thing, but subsequently sizing Spark for your Incorta environment is a sizing exercise all its own.  Check out the “Sizing Spark” section of this guide below to learn more.

Some organizations see their analytical applications as mission critical and require 24/7 up time.  For these customers we design and provision our Incorta environment with high availability in mind.  Most commonly, this means provisioning more than one analytic service in an active-active fashion behind a load balancer.  Some customers go further and want to also ensure fault tolerance for the loader service and metadata database.  Understanding these up time requirements is as important as any of the other considerations discussed here when designing your Incorta topology.

As the options enumerated below would suggest, there are a number of ways in which the topology of an Incorta environment can be designed.  The table below showcases some of the more common topology options, ordered from most straightforward to most complex.  These options are accompanied by recommendations which highlight when each option is most effective.  These options, however, do not represent every permutation of environment design.

A few things to point out that are not captured in the visual topologies below:

The following section outlines our common recommendations around hardware, both for on-premises configurations and for cloud-based configurations.  Please note that this section is not intended to prescribe the specific servers or the amount of compute required, as that is the role of this document as a whole.  Rather, this section is to help define the types of hardware to consider for both on-premises as well as cloud-based deployments.

The instance type used, as one might imagine is also a function of the sizing considerations explained above.  Cloud-based VMs should be sized in a similar fashion to the on-premises servers or VMs.

Whether we deploy on-premises or in the cloud, the number of environments is really up to the customer and their common practices around code migration.  At a minimum, we recommend at least two environments – DEV and PROD.  In this simplest of migration paths, DEV should serve as both the development and testing environment.  To what degree possible, if there are only two environments, we strongly recommend that the DEV-TEST and the PROD environment are of equivalent topology design and hardware resources.  This allows for much more effective troubleshooting down the road.  For a more sophisticated BI environment, it makes sense to have 3 environments, DEV, UAT and PROD.

Most of the "rules of thumb" we apply for sizing our Incorta environment depend on the amount of compressed data we expect in the storage layer, which we call "x" below.  Please reference the "Data Volumes" primary consideration section above to understand how we estimate "x".  The list below enumerates the main rules we apply when sizing our Incorta hardware. 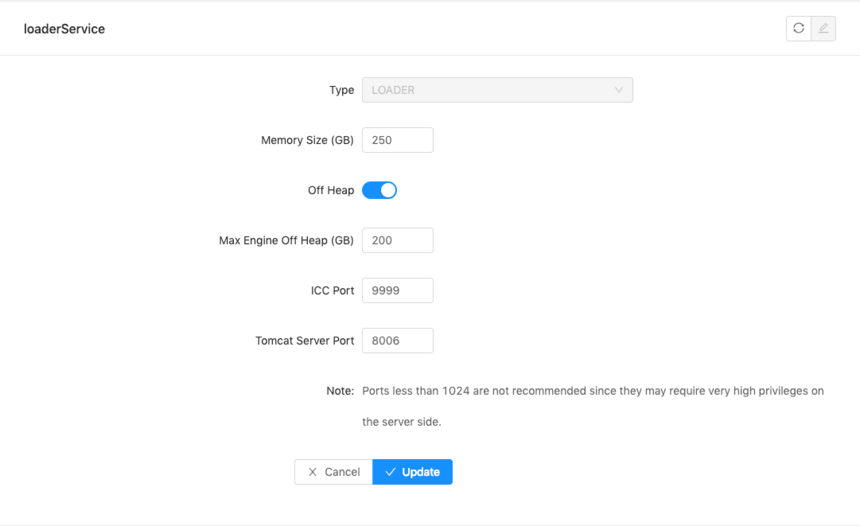 As a rule of thumb, it is a good practice to keep about 75% of the memory offered to Incorta off-heap.  This keeps the memory in the java process for the loader and analytics service (aka the on-heap memory) small which makes java maintenance activities like garbage collection less intrusive.

Keep in mind that these settings only control the amount of memory allotted to the Incorta services.  For example, you may have a 1TB RAM server and only choose to allocate 150GB to the loader service and 100GB to the analytics service.

The following section provides a few responsible sizing scenarios for Incorta production environments.  Keep in mind that the following is only meant to showcase suitable examples of valid hardware sizing based on the inputs.  There are certainly other valid options.